This article starts with an apology to my readers as I have not been able to keep up with writing this column as much as I would like this month. However, every now and again my chart tells me that it is time for another adventure.

So I will share with you my story and what I have been up to whilst not writing. Instead, this is Cosmobiology at work. I was born in Auckland New Zealand at high noon, on 20th April 1945.

My father was Croatian and my mother born in New Zealand from English decent. It was toward the end of World War Two, when Father met mother who was a waitress in one of his café’s in Wellington and Auckland.

She had gone up to the north island in search of a better life, as a lot of young girls did during those war years. Little did she know what an exotic and amazing adventure she was getting herself into. The blend of the Aries Sun and Leo Moon in my natal chart has a touch of romance and adventure, so I was well and truly ready to be caught up in the adventures of the Radovanovich clan and my whole life has been filled with interest and activity.

With the Moon conjunct Leo to the minute, if there is nothing happening, then I make sure something does. Also with this blend the reference books tell me that I have a fine creative spirit and would make a good executive, managing my own affairs well and also the affairs of others. I was not always a good business woman in fact I was a bit of a coward with Mars in the sign of Pisces but over the years I have grown into my chart and am now running my own successful company along with my husband Gavan.

As well as the signs and the planets, we also look at the patterns on the 90 degree dial. One can see that I have Neptune (planet of deception and deceit) midpoint Saturn and the Ascendant.

Ebertin, says in his book, “The Combination of Stellar Influences” that having this aspect in your natal chart is oppressing family circumstances and an emotionally depressing environment. Well; that was certainly confronting as when I started learning Cosmobiology, my life up until then had been anything but oppressing and depressing. Sure; we had many complicated issues as family’s do, but I did not consider my life disadvantaged and have certainly never been the victim. However, after my father died my mother’s life turned to a tragic tale, worthy of any soap opera.

Those aspects then certainly came into play. Fortunately, Cosmobiology helped me choose a lifestyle that was able to inspire others, rather than let me become engrossed in the depressing side of things. There is an old saying which I try to live by,

“The road to success in any undertaking is usually marked with highs and lows. Sometimes there are twists and turns and we may feel we have lost our way. Sometimes we are filled with zeal and enthusiasm and at other times we simply ponder quietly, our next step. Sometimes we seem to be on an accelerated path, at other times it seems if we are traveling in slow motion. Wise is the person who finds some good in even the unexpected experiences along the way.”
My father was left a large parcel of land on an island off the coast of Croatia when he was a young boy. That land was common knowledge in our family and money was sent over to the former Yugoslavia on many occasions, to keep it in his name.

When he died in 1974, we simply forgot about it, as we were all so busy getting on with the business of living and as John Lennon once said, “Life is what happens when you are busy making other plans!” In 2004 we made a family pilgrimage to his island to commemorate his 100th birthday or “birzday,” as dad used to say.

We found the land with our relatives help and since then negotiations have been taking place to try and acquire it by inheritance, for his four children. At first it was to go to my two brothers as that was the way things were back then. However, since laws have changed so much in the past 30 years and it is equal rights for women, I decided that if we want to keep it in the family name then my sister and I should also be entitled to a share.

After much discussion we have all agreed to have joint ownership. Being the oldest and having good aspects in my chart for land acquisition, I knew I had to go over there and tidy up all the loose ends. So; during June I took two weeks off and traveled to Croatia. When learning Cosmobiology with Doris Greaves, she often talked about a pattern in her chart, that she was able to use to make money in real estate.

I was a bit disappointed because I did not have that same pattern and being a bit entrepreneurial, thought I would like to buy and sell property. The lesson is of course, how to find the pulse in one’s own chart for doing what you want to do, as no two charts are the same. One day I discovered that Jupiter opposition Mars was a great real estate pattern. (Fortunate business deals or settlement) When Pluto transited that pattern during 2002 – 2004, I was able to do very well in the property market.

Looking to the solar arc for this year, we see that Mercury, planet of communication and contracts is to Jupiter, which is a wealth of plans and the ability to make fortunate decisions. Mercury then becomes the midpoint of this pattern and equals Mars, so therefore there is three good years to work with the property market in some way. Not only do I have a good aspect by Solar Arc, Jupiter in Sagittarius and Uranus in Pisces are transiting this point for some time.

Croatia is a beautiful and historic country which dates back centuries. It is a country that has been off the radar for holiday makers for some time, due to the war in the 90’s. Now all of a sudden it is starting to become popular. The weather is stunning, the cities are clean, the scenery is magnificent and the people are friendly and most in the holiday towns speak English. People are discovering its glorious beauty.

Glorija at the Five Star Hotel Ariston in Dubrovnik 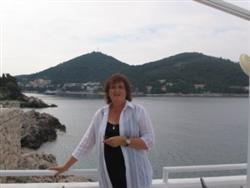 The solicitor decided that we have a good case and said that it may be as early as September this year when the case can come before the court. However, they seem to be in a different time zone to the rest of the hurried world, so I am not holding too much hope.

Jupiter does pass over this pattern on its way into Capricorn from the 13/10/2007 until 11/11/2007 so realistically it may work out. On the next two ingress patterns I have Venus/Neptune across to the Saturn/Neptune/ Ascendant so this does not always go well for money issues.

This will not be an easy period and usually relates to a disappointment of some sort. At this stage I am not sure if it will be related to the land issues.

Over the past six months I have had a double up of the Saturn/Neptune, Saturn/Neptune which has made things extremely frustrating. It has been like one step forward and ten steps back but philosophically I have still made ground overall. Looking ahead to the next years transits, around June 2008,

Jupiter=Mercury on that winter ingress, so that is also a good pattern for land contracts. If we do secure the land in our name before next June, there is a house in one of the small towns on the island which we would like to renovate, to use for a holiday place for family and friends or just a hideaway, which is peaceful and quiet to be able to concentrate on more writing. Once again Mercury/Jupiter is good for contracts and negotiations. It would also be an ideal place to run Cosmobiology seminars for those located on that side of the world.

A fabulous place for spiritual learning’s. My trip was not without incident as on my return I had to contend with the Sun/Pluto and the Moon transiting the Saturn/Neptune.

Being forewarned of the difficult days made it a little easier for me to sort out the concerns. Once again the astrological insight gained from such an adventure was enormous.