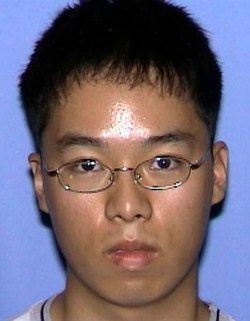 America is in mourning once again, over mass shootings on a school campus.

It was only a short time ago, whilst driving back to Melbourne from Sydney that I read an article on mass school shootings around the world and the statistics said that roughly, three quarters of those shootings were in America. Sadly, we can now add one more.

Cho Seung-Hui Horoscope – he was born in South Korea on 18th January, 1984 and moved to America with his family when he was eight years old.

On the positive side, this combination can give great courage to overcome adversity but on the negative side, it can be a volcano waiting to erupt. Deep intense passions can be seething inside and beneath the cool and austere appearance can lie lurking, a burning drive that keeps emotions in tight control.

It has been said, that in no way can an astrological chart reveal a predestination to be a killer, which is true because a lot depends on hereditary factors, the environmental conditions under which we live and the power of choice. However, in any personality, there are certain patterns that may, if given the opportunity, manifest in a more disturbed way.

The bonus of astrological knowledge is to define whether or not a person can be helped long before he or she gets to the point of no return. Reference to this statement can be found in the book, “Destined for Murder,” author’s Sandra Harrisson Young and Edna Rowland who have this to say:

“Can a serial killer be spotted by examining his or her astrological birth chart? In their opinion, an experienced professional astrologer should be able to pick out from a total of ten or twelve random charts, at least three having the most potential for violence or instability. Is this the same thing as predicting murder?”
They then go on to say:

No, it isn’t because astrology is not fatalistic. Astrology deals with probabilities- although many people wish it were more specific. Then too, there is a distinct difference between mundane (event-oriented or predictive) astrology and natal astrology, which deals with birth charts. People have choices, but events don’t. To put it another way; events don’t have the potential for change.”
In fact, taking the theory one step further, it is all in the triggering mechanism, as they say, “the clock of life is wound but once.”

The potential may be there but what tips a person over the edge? We all have days when we feel angry or agitated. It is just one of the many moods that we may have, on any given day, but fortunately most of us do not go out and commit a violent act. In the book.

“Rapid and Reliable Analysis,” Reinhold Ebertin, describes the triggering method as defined by Professor Rudolf Tomaschek, in his paper, ‘Cosmic Force Fields and Astral Influences,’ given at the 10th work conference of Cosmobiological Research in Aalen in August 1958 as “The Bird on the Roof.”

Professor Tomaschek asked, “Are the positions and movement of the stars the cause of the observed effect?” He then based his talk upon the fact that, “the structure of our scientific thinking forces us to the conclusion that every event in our sphere has adequate cause, but to find this cause is not at all simple or straight forward.” He describes it this way:

“When a tile falls from the roof, the reason lies in the force of gravity, which in turn is caused by the great mass of our earth, but why did the tile not fall earlier, why now? It may have moved by a gust of wind, or by a bird. So; there is a triggering mechanism. This triggering off mechanism, which may have been the hopping of a little bird on to the tile, bears no relationship to the harm the falling tile may cause.
If one just happens to be walking by when the tile falls and it lands on one’s head, then it could prove potentially fatal. A total random event, which unless one has astrological knowledge and knows the family charts then anyone of us, is likely to be the victim of that random event.

They call it being in the wrong place at the wrong time or similarly for something good, the right place at the right time. Using the Ebertin system, the quad dial on the Janus program makes it amazingly easy to read one’s life at a glance within the four circles. (Inner = Natal, second = Solar Arc, the progressed horoscope in the third circle, and on the outside we have the transits of the day.) Once a chart is set up and you see a potentially problematic period, you are then able to access an animation button which allows you to see the transits to the other wheels in advance and observe the date when a triggering pattern is likely to occur.

Looking into the future can be a very scary observation as I have found out on many occasions. I will share with you an experience in my next article, which took place three years ago, when I had a moral dilemma after noting a powerful pattern in a family member’s horoscope, which was of grave concern.

But for the moment let us look at the character of Cho Seung-Hui, the signs and the triggering point in the horoscope leading up to the this tragic day. To try to simplify the number of charts I am going to look at the Quad dial, which shows the Solar Arc and then introduce the Tri Dial for the first time. Chart (1) is the natal chart on a dual wheel. No time available but if not an Aries Ascendant, possibly a Scorpio one.)

As I have said before, there are certain periods of time that are more predisposed to tragic events than others and again this was one such period. On 18th March this year we had a solar eclipse to Pluto in the heavens above and for those scientists who have got rid of Pluto, think again.

The eclipse was followed two days later by the Aries Ingress, again the Sun being to Pluto. The Sun to Pluto is a very powerful aspect and can bring suffering, a danger to life or martyrdom so the Eclipse to this point, followed by the Ingress a few days later proved to be the case. A solar eclipse has a six month orb and an Ingress a three month orb. Knowing what a powerful moment we were in, a disaster of this magnitude was just waiting for the triggering point.

Looking at chart (2) we see the American chart in combination with the Eclipse and the Ingress. The transiting Pluto is 45 degrees apart in a semi-square to Chiron seen easily on the 90 degree dial as it is straight across on the other side. Pluto is a process of evolution and Chiron, the wounded healer.’

The semi-square is slow moving and brings a tense and difficult period in one’s life, so for the families of those killed in the massacre, their suffering is immense. Not much movement in those two days between the Eclipse and the Ingress, but we do see Mars coming in closer to Saturn across to Jupiter/Venus which turned out to be a chilling picture (Coldness of feeling, a complete and utter concentration of energy upon a particular objective to the entire exclusion of other interests.)

The Aries Ingress chart is also very telling, as the Moon=Pluto across midpoint Ascendant/Uranus suggests a violent reaction to the environment and the tendency to cause many upsets in one’s community. Also transiting Node = Uranus (Sudden incidents in communal life.) Looking closely at chart (3) Cho Seng-Hui’s natal horoscope in the centre of the quad dial, there are two patterns which stand out:

Neptune/Jupiter (a person who is constantly misunderstood by others) across to Saturn. (pessimism, false hopes and plans)

Mars/Pluto (Super human force and the tendency to proceed in a brutal manner.) On the day of the massacre, the progressed Mars had come to Saturn and if we follow the pointer, it links to natal Saturn/Jupiter/Neptune, transiting Chiron and Pluto. The Solar Arc Moon would also link in if born around noon. A complicate set of patterns but does set up the possibility of brutality, assault, violence and the possibility of death.

Fortunately; it is not that often we see a chart with so many negative combinations, but as Harrisson Young, and Rowland pointed out given several charts and asked which were predisposed to violence, this one would certainly stand out on the Ebertin method.

Also this system is very good when no time of birth is available as we still get 75 percent of the information of the personality and the event. Chart (4) is another method which reveal the seriousness of the situation. Cho Seung-Hui’s natal chart as compared to America and the transits of the day, also tie in his natal Sun on 27 degree cardinal, to Pluto on 27 degree cardinal of America’s chart and the transiting Sun of the day, 26Aries06 within a one degree orb.

This Sun/Pluto also makes a midpoint to the Saturn/Node of America’s chart. It is hard to imagine anyone’s mind being so tortured that they resort to such drastic measures, but sadly it is a sign of our times.

The combinations of bad behaviour, coupled with the use of drugs such as heroin, marijuana or even prescription drugs is all too familiar in stories like these.

It seems that certain personalities can get addicted to these modems and somehow it becomes a lethal cocktail. Prolonged misuse of certain drugs can change the chemical makeup of the brain. Over the past 10 years or more I have collect many, many, articles from the newspaper that describe these similar symptoms in the personality and then go on to say what drugs people were allegedly on. In no way could this event be foretold in its entirety unless an astrologer was looking at this man’s chart or the charts of his family members and was able to pick up on the clues that have been reported in the newspapers about his behavioral patterns.

One teacher had refused to teach Cho, because of his odd behaviour and his disruption to other students. She then went on to say that she did not persue the subject as sometimes odd behaviour begets a genious and then she would look foolish. Sometimes even when we do pick up on things, no one wants to listen or help, so it is catch twenty two.

I do apologize for the longer than usual article and my lateness in getting it up on the internet, after the event as I know readers are anxious to see why these things occur, but with such a complex situation and personality, I refuse just to write just anything for the sake of just getting my work up on the net.

I will not compromise the brilliance of Ebertin/Greaves work in any way. Over the years I have been able to help my family and clients thorough many a difficult situation using the various methods used in this article. I was taught if a pattern shows up once then it is possible, if a pattern shows up twice it is probable and if it shows up three times, then it is a given. In my next article, I will show an example of how I used these same method when a serious situation occurred and how I worked it through.