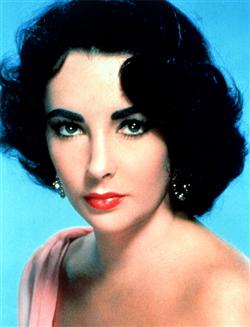 Someone once wrote, “for all her eight marriages and seven husband’s, Elizabeth Taylor’s major love affair has been with the public.”

Ever since she captured our hearts on the silver screen as a raven haired 12 year-old beauty in National Velvet, her first major film success, we have followed her life with great interest. Now aged 74, she has once again hit the headlines as her delicate health hangs in the balance. Elizabeth Taylor was born in London, England on 26th February 1932.

The time was 2.00 am according to the “Woman’s Day” magazine, (4/7/1989) which quoted the source from her mother. This makes sense as it puts the Moon in the natal chart very close to Jupiter, and the Moon to Jupiter certainly indicates an ongoing relationship with the public.

So; what kind of horoscope does one have to have to captivate the public interest for over 60 years apart from the Moon=Jupiter?

Born with the Sun, (the living being) in Pisces, Elizabeth has the Moon (impressionability) in the sign of Scorpio and this can produce a strong, determined and successful person. Through the energy of this Moon placement, one can translate the passions into creative, artistic and inventive work and this she has done very well over many, many years. Whilst the Sun in the horoscope’s role is to make us conscious and vitalizes our senses, the Moon’s role is to make us look back and reflect on our heritage and traditions.

Ideally then, in the present moment, when we are faced with a dilemma, we can look back and learn lessons from past mistakes. The level of success is then determined by the strength or weakness of the Moon’s position. The Moon in Scorpio would have to be the strongest emotional sign of the zodiac. It can make a person strong-willed, intense and passionate. It also allows them to access to the heights and depths of emotion unknown to the rest of us. Whether this works in a positive or negative way, does depend on the rest of the horoscope. Hereby, true survivors usually have Scorpio placed very strongly in their chart as is the case with Elizabeth Taylor.

My mother had a very tragic life and their were many times when she, was, “knock, knock, knocking on heaven’s door” but she always rallied around and I believe it was because she had the Moon in Scorpio. The Sun/Neptune in Taylor’s horoscope tells us that there is a tendency to weakness or illness but on the other hand does also give an indication to an abundance of experiences, in the spiritual realm. This pattern also has links to Mercury which when placed close to the Sun usually gives good mental faculties but with the planet Neptune close by, could easily cloud the judgement. Of course this aspect is excellent for acting and fantasy roles.

The Venus/Uranus aspect is another aspect that shows her popularity. The publicity to this lady and the latest life threatening illness shows up clearly on the Aries Ingress. I have placed the arrow on the Jupiter/Neptune pattern of the Ingress as it is in aspect to Chiron (health and well being) and goes across the dial to the Moon’s Node which is the relationship with the public. When shown on a mid-point dial like this we can see also that the pattern picks up the Sun and Saturn of Elizabeth’s natal chart.

This is the classic delicate health pattern. Many a curtain has come down on the life of Elizabeth Taylor, but despite recent newspaper article’s claiming that she is once again at death’s door, astrologically speaking. With Jupiter involved in this Ingress pattern in a major way, she may be still in the wings for quite some time to come.

In a 2004 interview asked about all her brushes with death she was quoted as saying, “There is something resilient in me that makes me keep fighting. It’s the damnedest thing – I just keep coming back.” With the resilience of the Scorpio Moon and the luck and optimism of Jupiter, Liz lives to fight another day. In the later part of 2007 more serious health issues may be harder to overcome but, for the moment the ‘pearly gates’ at heaven’s door are still closed for this screen goddess and ultimate superstar.