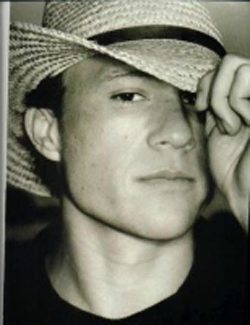 Written without prejudice “Heath has touched so many people on so many different levels during his short life but few had the pleasure of truly knowing him.” Heath Ledger’s family.

At the recent Federation of Australia’s International conference in Sydney, I heard it said, “that Astrologers make the best psychologists,” and this is because by looking at the planets, signs and personal points, one can get a true understanding of the person.

Astrology tells it like it is and once we start to understand our personality, and get a glimpse of who we are, we can work on eliminating the negative qualities and start strengthening the positive qualities in our chart.

With the study of Cosmobiology we have an added bonus because the patterns of the personality show up as well. The patterns tell us how those qualities of the signs and the planets will reveal themselves as the journey of life ebbs and flows.

So; let’s take a look at Heath Ledger’s horoscope and see if we can shed some light on his personality and what were the influences surrounding his death.

Ledger was born on the 4th April 1979 in Perth (no time) and the one thing that stands out is, Venus, planet of love and beauty close to Saturn, planet of frustration and separation. In his chart he has the Sun in the dynamic sign of Aries and the Moon in the emotional and sensitive sign of Cancer. Here the intellectual powers are strong with an intuitive understanding of both things and people. With this combination there can be a keen sense of the dramatic which does make for a lively companion when one is in the mood. However, moods can become a problem and one can spring from confidence to pretty heavy dejection in the twinkling of an eye. Aries and Cancer are not the most compatible signs and can become an emotional see-saw as they have different polarities. Aries can be full of confidence and Cancer can be extremely sensitive. Aries represents the ram and is a fast mover and Cancer represents the crab and is a slow mover. The emotions with these two signs are not congruent and one must work hard to find a balance between the two as the rewards can be great, a deep feeling person with a rich inner life. Mercury, Venus and Mars in the sign of Pisces gave Ledger the ability to understand human emotions to the point where he became a stunning actor, but unfortunately if not under control there is a danger of drowning in an emotional sea of misunderstanding one’s self.

Heath Ledger has two main patterns in the natal horoscope. The Mercury/Mars can give the achievement of success through the spirit of endeavour and makes for an impressive speaker, whilst the Venus/Saturn can give a focused determination to succeed and a sense of duty, it can also give difficulties in love-life. I recall looking at the chart of Heath Ledger some time ago and wondering if the Venus/Saturn in the natal chart may be a karmic calling as sometimes it is the indicator of fate, however it does not mean that every person with a Venus/Saturn aspect in their chart will have a fated chart. What it does mean though it is very important that one find their true calling as quickly as possible and understands the chart so that the positive side can be activated thus giving the personality strength and stability. Having a partner who much older is one such positive quality.

One of the patterns in my natal chart is Saturn/Neptune/Ascendant, which in Ebertin’s book says, an emotionally deprived life. Over twenty years ago when I saw this, it was a bit confronting so I knew I had to change the dynamics in some way, as with the Sun in Aries and the Moon conjunct Pluto in Leo, a girl just wants to have fun. Like Ledger, I also have Mars in Pisces which is not an easy placement, as it does tend to gives fluctuating energy and emotional highs and lows. When you are up you are up and when you are down you are down. Again it is a matter of understanding the person as a whole.

Unfortunately the astrology of fate in my chart took the form of my mother’s tragic life. Looking back I realise now that she was a classic case of “the mothers little helper pills of the 60’s.” (As I have Saturn conjunct the Ascendant in Cancer square to Neptune in Libra, the determining factor in my chart was my mother as Cancer rules home and family.). Once I realised she had a mental problem it was too late to get her off the tablets and in 1983 on her second Saturn return she had a complete breakdown. My husband’s son, a very talented young man with a natal Sun/Saturn also became hooked on recreational and prescription drugs but again it was out of our control and we were powerless to help. He died in his sleep at the age of 22.

With any difficult aspect such as Venus/ Saturn, Sun/Saturn Saturn/Neptune/Ascendant or other aspects to Neptune, the one thing a person must steer clear of is taking drugs in any shape or form, including prescription drugs for depression. What starts off as a seemingly answer to our mood swings can quickly become an addiction, craving more and more drugs. Sometimes people are quick to judge and so we try to conform to something we are not and this does not help our personality grow and develop.

Here in Melbourne we have a controversial radio personality called Derryn Hinch who is an Aquarian. He recently married again and has great delight in telling everyone that even though they are married they live in separate apartments in the same block. Every now and again someone will ring and abuse him, saying that that is not right and how dare he judge other people’s living conditions when he does not live with his wife. Of course as astrologers we know that the only sign in the zodiac that could live happily as a married couple in different apartments or houses are Aquarians. So; I just have a little smile.

Life for all of us is a delicate balance but with the help of astrology, psychology and other more spiritual tools, we can begin to understand our own peculiarities and unique personality, but to use a drugs or the more milder addictive substances such as alcohol or cigarettes to enhance ones self esteem is the beginning of the end. If I can offer any suggestion then it would be learn all about your own personality and that of your family and see where the strengths and demons lie because, we are all capable of turning things around, we just need the right help. Unfortunately for Ledger it seems that his death was the outcome of too many drugs in the system. A cocktail of recreational drugs plus a combination of anti depressants over loads the body to the point where the heart just cannot cope. Also, he was in the most critical of all stages in astrology and that was his Saturn return which occurs every 28 years. This is either a make or break time.

On the day Ledger died Saturn was making a station to the natal Venus/Saturn and usually the year before this occurs major changes are taking place. Relationships have changed or ended and one can be dominated by a feeling that if you don’t do everything you want to now time is running out. Ledger had broken up with his partner, Michelle Williams and she had custody of their little girl Matilda Rose. It has been alleged that his drug problem was behind the split. Sadly, addiction and bad behaviour will be a more common occurrence as the drug problem grows. Until we are willing to take responsibility and realise what damage these things do to our system, this will just be one more soulful thread in the tapestry of life. PS: Some of the filming of Ned Kelly in which Heath Ledger starred, was filmed here in our town of Mornington, Victoria Australia.