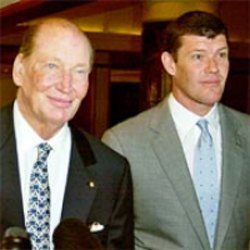 Shortly after 11.30am on Wednesday 18th October, 2006, new media laws were passed through the Australian Parliament, allowing billionaire James Packer to divide up his media portfolio and conquer a deal of a lifetime.

Considered a master stroke, his sale of 50 per cent of Publishing & Broadcasting Ltd (PBL) to a consortium of overseas private equity players, CVC Asia Pacific for approximately 5.5 billion dollars, will free up cash for the young Mr Packer to pursue his interest in global gambling and gaming opportunities.

Astrology is all about harnessing the power of the aspects made by the planets, as they ebb and flow in the universe, on a daily basis. It is then up to the individual who has a good command of astrological language to use this energy to their advantage. hether the young Mr Packer has astrological knowledge or not, he certainly has used the energies of the universe, over the last few days to his advantage.

Using astrology as a forecasting tool in the area of investing is a practise that has been around for a long time. It was reported many years ago that astrologer, Evangeline Adams counselled J.P. Morgan, that great American financial wizard, on his investments.

He stated that “Millionaires don’t hire astrologers; Billionaires do.” Born to media mogul, Kerry and Roz Packer, on the 8th September, 1967 in Sydney Australia, his horoscope has all the trappings of success. (See previous article for break down of his chart) Because we have no time of birth, we are not sure if he has the Moon, (emotions and sub conscious thoughts) in the sign of Libra or Scorpio.

Last time I thought he may have had the Libra Moon, but now on reflection I am more inclined to think he has the Moon in Scorpio because of the power he obviously wields behind the scenes. With the Virgo/Scorpio combination of the Sun/Moon it gives the chart a lot more intellectual power.

To make him unbeatable in his wheeling and dealing, he must remember to use the head to rule the heart, not the other way round, otherwise he stands in his own shadow. On the Libra Ingress, cast for 23rd September, 2006 at 2.03 pm in Sydney Australia, we see that there is a Jupiter/Neptune in the heavens not the far away from the same pattern that James has in his natal chart. This is considered the gambler’s aspect as it stimulates the desire to gamble or speculate, reflecting a gain without effort.

So; having this double up in his natal chart plus, in the heavens on this ingress, it is no surprise that the Federal Government changes to media laws has unleashed a take over frenzy for the Packer empire. Jupiter/Neptune on this ingress suggests rich powers of perception and visualization, rich being the operative word, with billions of dollars changing hands within minutes of the new changes taking place.

This same aspect encourages one to strive for power and success and arouses ambition to achieve great things. In the individual, it creates a high with energies that carry one further than usual. However, whilst at the moment it looks like James Packer has made a spectacular move, this is the kind of aspect that could come back and haunt him at a later stage. On the negative side it can provoke conflict with those in power, so unless the deal is completely scrupulous, then there may be resistance at a later stage.

It can be very difficult to keep the real from the unreal in such a euphoric state and at the same time we have a Jupiter/Neptune in the Ingress chart, we also have Mars to Saturn. This is a very difficult aspect at the best of times, indicating harmful energies. So; maybe this is not such a good deal for the Packer empire, or maybe it is just not a good deal for the Australian people. It has been mooted the consortium is not in this deal for the long haul.

They just want a solid investment that makes money for them. The next time this aspect appears in the heavens is May 2009. Jupiter will be conjunct Neptune in the sign of Aquarius, so maybe it will be then that the consortium sell off for their quick fix. Not only that, the Jupiter/Neptune will make a midpoint to the Jupiter/Mars of James packer’s chart.

Hard not to see someone making a lot of money. It is not until the end of 2010 that certain difficulties will arise. When his father died last December James Packer had big shoes to fill, but it seems at the moment he has well and truly grown into them, for the moment anyway. Only time will tell, if this is the right move or not.