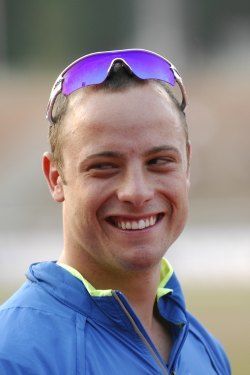 Golden couple, sporting hero, Oscar Pistorius and girlfriend Reeva Steenkamp were media royalty in South Africa. They seemed to have it all and were recently dubbed the African equivalent, of England’s “Posh and Becks.”

Olympic hero, Pistorius was handsome, fabulously rich, and lived in a mansion. He had the world at his feet. However; life was extremely difficult in those early years. At the age of eleven months he had both legs amputated below the knee but he never let his disability stand in the way of success.

Peter Rolfe, Melbourne’s Herald Sun newspaper, describes him as an, “international sports star who was an inspiration to millions when, on prosthetic legs, he became the first amputee to compete against able-bodied athletes at last years Olympic Games.”

His girlfriend Reeva Steencamp was a model, rising television star and law graduate. They had been a couple for around three months but by all accounts it was a very rocky relationship. She was shot dead in the early hours of Valentines Day, 2013, at his home at Silver Woods, a secure housing estate in Pretoria. Police have since charged Pistorius with one count of premeditated murder. So; what went wrong?

Oscar Leonard Carl Pistorius was born on 22nd November, 1986 in Johannesburg, South Africa to parents Henke and Sheila. (Sheila was born on 8/5/1958 and died on 6/3/02) He must have been very close to his mother as he has her name and her date of birth and death, tattooed on the inside of his right arm.

On the day he was born the Sun was in the sign of Scorpio, as was Mercury, planet of intellect and communication, and Venus, planet of physical attraction, giving him a strong Scorpio signature.

The only birth time that I have at this stage is at 10.30 am which puts the Moon in the sign of Leo. The Moon changed signs around 2.30 am that day, so if he was born earlier it would have given him a Cancerian Moon which is the polarity to his mother’s Moon in Capricorn.

There is an amazing amount of energy associated with the Sun in Scorpio and the Moon in Leo. These individuals are the ultimate pleasure seeking, self indulgent individuals. Compromise and patience are not in their vocabulary.

Determined to follow their dream, woe-betide anyone who stands in their way, the Scorpio/Leo blend demand loyalty. They can be very affectionate and generous but on the other hand if you don’t agree to their demands they can be very possessive, jealous and overbearing.

Adding to the strength of this combination is Mars in Aquarius which also thrives on adulation, the need to be loved and adored. Incredibly unpredictable they can hide their emotions behind a cool detached exterior.

If the 10.30 am time is correct the Ascendant of the chart is also in Aquarius therefore emotionally there is always the possibility to alternate between skepticism and sentimentality and thus destroying any stability which should be the foundation of the personality.

In the natal chart one of the planets we look at for success is Mars, planet of energy and drive. Here we see that Mars, planet of excitement, energy and violence, is very close to the Sun. Passion is the key word here indicating a very forceful person, driven by the need to succeed. If not used in a positive way, emotions can simmer under the surface.

Pluto, planet of death and regeneration is now within orbs of the natal Mars/Sun across the dial, creating a strong period of high energy. Sometimes after reaching the pinnacle of success it is very hard to come down from such a high.

Pistorius’s remarkable story of triumph over adversity and the manner in which he was single-handedly overturning the global image of disability is now just a dim memory.

The Ascendant of the alleged murder chart to the solar arc Neptune across to the progressed Mars/Saturn, indicates a mysterious death and it may be very hard to get to the truth.

In Ebertin’s book, The Combination of Stellar Influences, it states that with this combination there can be an abuse or betrayal of confidence, disappointment and disillusions, falsehood and deceit.

Transiting Mercury also activated this pattern on the day which suggests the inclination to take the wrong path and transiting Mars to natal Saturn is harmful or destructive energy.

Sometimes with Mars in Aquarius the individual can suffer from nervous tension in which case when cornered the highly developed mind can produce excellent reasoning powers and colour the truth to suit ones own needs.

Inside his home in a prestigious gated community, Pistorius kept a cache of high-powered weapons. It is alleged that he lived with a revolver by his bed and a machine gun by his window.

When one has a history of violence it is so easy to reach for a gun in a moment of madness and in a fleeting moment, leave behind total devastation.

Like America, South African’s appear to have a misguided gun culture that believes in the right to bear arms for self defence.

In Australia after the Port Arthur massacre in April, 1996, when 35 people lost their lives, the then Prime Minister, John Howard introduced stringent new gun laws which included banning the use of military-style weapons.

Australia still has some of the toughest gun laws in the world and since that time shooting deaths have decreased.

There are two sides to this story, Pistorius says that he thought that the victim was an intruder and he shot in self defence however; South African prosecutors say that Steenkamp was at the apartment by invitation and have formally charged him with one count of murder. Out now on bail, he is awaiting trial.

We can tell a lot about a person from the natal chart but whether or not the individual uses the positive or negative energy is entirely up to them.

This is the story of world fame and murder on a collision course and as quoted in the, “New Zealand Weekend Herald” on 23rd February 2013, fame – as in the real global fame of the kind that Oscar Pistorius enjoys – has its own protective force field. You can believe in a star even when you no longer believe in the story they’re trying to peddle.

It will be very hard to get a conviction, only time will tell which way the planets will play out their cards and as always, Mars in Aquarius plays to the beat of a different drum.