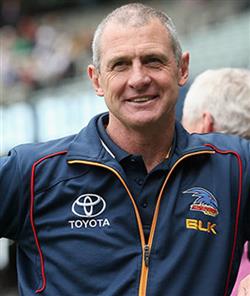 The game continues to evolve and if you’re not looking to change and tinker with a few things you’ll get left behind. “Phil Walsh”

We will never know, just how good master tactician, and coach of the Adelaide Crows football club would become, because on a full Moon in the sign of Capricorn, the grim astrological aspects played to the beat of a very dark drum as we awoke to the news that Phil Walsh, had died and his wife Meredith was in hospital with knife wounds.

The news did not get any better, when later in the day we heard that Walsh’s 26 year old son was charged with his murder.

The circumstances surrounding the death still have to come out but, in this day and age we are fully aware of the problems surrounding drugs, alcohol and domestic violence.

Twenty years ago one of my students of Cosmobiology had a similar situation where her nephew killed her brother, in other words a son, killed his father. It was later revealed that the son was asking for money for drugs and the father had refused to give him any.

The repercussions for my student were enormous and despite her amazing knowledge and understanding of life through her studies, she never recovered emotionally and died a lonely death from prescription drugs and alcohol.

From humble beginnings Australian Rules Football has become a multi billion dollar industry. The participants are highly paid superior athletes who live and breathe the sport.

Each season 18 teams contest the premiership watched by millions and to the footy fans, coaches can be hero’s or villains depending on whether or not your team wins.

Ebertin wrote in his book, Applied Cosmobiology, “No other area of science possess Cosmobiology’s potential for understanding man as a whole, and for comprehending not only his nature but also a most valuable tool for instant psychology, psychotherapy, medicine, history, ethnology and many other areas.”

When we apply the horoscope to the 90 degree dial, what does seem complex, on the 360 degree chart, turns into a simple tool for understanding human nature and the possible outcome of our journey.

The patterns the chart makes, and more importantly the degree on which they sit, shows all the light and shade, the nuances, the ideologies and the endless variety of man’s inner and outer world and experiences.

Walsh grew up in the sleepy country town of Hamilton, in Victoria. He was passionate about football and once his goals were set, few would have been able to match his determination and dedication. It was reported in the newspapers that he was a fiercely demanding individual and a meticulous football coach.

When we examine his birth chart we find that on the day he was born, March 15th 1960, the Sun was in the sign of Pisces and the Moon in Libra. This gives a very delicate balance between the emotions and personality. He was a giving individual with a brilliant creative mind.

The correlation between Venus and Mars in the sign of Aquarius, made him an original thinker, a people person and the hub of the community. Mars represents our energy levels and is made more potent by being placed next to Uranus planet of sudden and unexpected events. Here was an emotionally charged individual, who wanted to make the footy world a better place.

Football was his life. Walsh started his playing career with Collingwood in 1983, followed by Richmond and the Brisbane Bears, where he won the inaugural best and fairest. After retirement he had various coaching roles at Geelong, the West Coast Eagles, Port Adelaide and finally was the anointed coach of the Adelaide football club for 2015.

So; at the height of his career, where did it all go wrong?

Cosmobiology is also good for rectification and without a time of birth I decided to tinker with his chart and put the Ascendant on the last degrees of Aries. This would strengthen his chart and back up his obsession and total dedication to football.

The natal Moon is now applying to Saturn instead of separating and can indicate a disappointment in life. The irony of the situation was that to the Adelaide team, he was a father figure, coach and teacher.

He was doing an amazing job but with his own son there was a disconnect. Here was a man torn between family and his greatest love but sometimes when we cannot help in one area we choose to make a difference in another.

The rectified chart for Walsh’s 55th year, by Solar Arc, puts Pluto, planet of destruction on the Ascendant point and this may have pointed to the susceptibility of violent disputes, quarrels and injuries during the coming year.

On the day of the murder transiting Moon triggered the progressed Saturn across to the natal Pluto. Both transiting Pluto and Saturn are in a retrograde motion across the dial to the natal Moon/Saturn making these very potent aspects.

Doris Greaves, “if we see a double up of combinations in the charts, we need to be alert to the possible outcome. One of the outcomes as described in Ebertin’s book, “Combination of Stellar Influences,” is separation from the wife. Sadly for this high profile family, it is not only separation from the wife but his daughter and football fraternity as well.

Footballer, Mark Ricciuto, said, “these are shocking circumstances. Some things don’t make sense.” In this lifetime a lot of things do not make sense and grieving for a murdered person is a difficult process.

Over the past 10 days moving tributes to Phil Walsh have been paid at each football match as the teams stood side by side in a moment’s silence. Our hearts go out to the Walsh family and the football community.

Phillip Walsh, may you rest in peace.