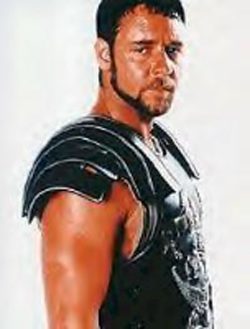 When Russell Crowe, flew into Australia early 2001, on a whirl-wind tour of the country to attend the premier of his film, “Proof of Life”. Fans in two states, Victoria and New South Wales were able to see this jet-setting international star first hand and they were not disappointed. In true Hollywood style – he was the Star.

The newspapers described the tour as a challenge fit for a gladiator. Russell Crowe was born in Auckland, New Zealand on the 7th April, 1964 which in astrological terms makes him a native of the sun sign Aries. His parents were Jocelyn and Alex Crowe. He has one brother. In New Zealand, the family name is synonomous with cricket and Martin and Jeremy Crowe are household names.

The seeds of success were well and truly sown when Russell came along. As a youngster, Russell’s family settled in Australia so part of his education was done here. The family then returned to Auckland where Russell completed his schooling.

In the early 80’s he formed a band with guitarist, Dean Cochran, called “Roman Antics”. With his changing musical style, eventually it lead, 6 years ago to the partnership of his rock band “30 odd foot of Grunt”. Crowe’s film career took off and the rest they say in the classics, is history.

After a series of high profile romance’s including one with Meg Ryan, he finally settled down in April 2003 when he married Danielle Spencer at his property in Coffs harbour. …Crowe’s horoscope reveals a strong dynamic blend of Aries/Aquarius, making him highly social and magnetic. Every inch, “a star”. His interest in people pays large dividends, whether it takes the form of dealing with people in business, in public life or in public contact. Jupiter, planet of luck and fortune, Mars, planet of action and drive and the Sun, which rules our personality are all in the sign of Aries and this makes him fun loving and pleasure seeking.

This aspect makes it hard for him to be tied down. Venus, planet of love and affection in the sign of Gemini, makes him flirtatious, oportunistic. A good aspect to have for a male film star. Russell Crowe was nominated for best actor a second time for the film Gladiator, which was nominated for 12 Oscars in total. Russell Crowe was 2 / 1 favorite to take out the prize. The Academy Awards took place on the 25th March, 2001 in Los Angeles. and this time Russell Crowe had some nice aspects in his chart.

Jupiter, planet of luck and advancement in the sign of Gemini, had gone direct and and was in close contact with Uranus, planet of sudden changes in his natal chart. This was a very lucky aspect and proved to be a bonus as he took out the coverted award. Certainly a blissful realization or a fortunate turn in life. Also by transits, Crowe had the Sun (the spirit, the living being) in aspect to his natal MARS / NODE. This enhanced good fellowships and comradeship and gauges the mood of the moment.

By Solar Arc, another method of predicting ones success, Pluto, planet of force and invisible power had come to the Sun, which can in effect push one to the top of one’s profession on the positive side. Jockey Michael Clarke had this aspect when successful. He won the Melbourne Cup, Australia’s prestigious horse race. So: in that moment in time, Crowe’s stars were in alignment and as the say in the classic’s, “Ain’t luck a fortune!”