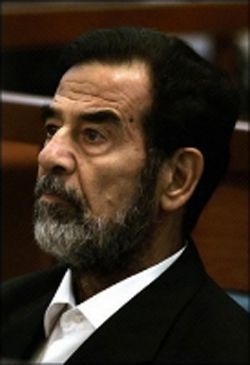 The end came quickly for Saddam Hussein, bringing to a close, a life of tyranny, dictatorship and brutality. He came into power on July 16th 1979, taking over as president from al-Bakr.

He ruled with an iron fist, and quickly earned the nickname, Butcher of Bagdad. He was no sooner in charge when he sent troupes forth into Iran, setting off an eight year war.

He ruled Iraq, through brute force, torture and cunning, for a total of 24 years. According to newspaper reports, at least 300,000 of his countrymen were murdered under his regime.

So: do these qualities of tyranny, dictatorship and brutality, show up in the horoscope. He was born on 28th April 1937 in the village of Uja near Tikrit, in Iraq, although this data is thought to be only supposition, as his birth was never recorded.

To begin to understand the personality we need to look first to the Sun/Moon combinations. Here in Hussein’s chart we have the Sun in Taurus and the Moon in Sagittarius.

The Sun and Moon combinations are either in harmony or they are not. The Sun, which is out outward personality, needs the Moon, which is the emotional part of our horoscope to be congruent so as to strengthen the personality and provide us with good, healthy self esteem.

If these two are not congruent then the personality is often at a disadvantage bringing conflict within ones self, that has to be nurtured and cared for in our formative years. The Sun/Moon combination in Hussein’s chart are any thing but happy, with the personality and the emotions lacking harmony.

The sign of Taurus is stability and the sign of Sagittarius is freedom. Growing up, we are told that his childhood was very traumatic. His father disappeared not long after his birth and his step father was very cruel toward him.

So this left his personality to be developed under harsh and difficult conditions. Sun in Taurus and Moon in Sagittarius made him very forthright and stubborn, determined to do things his way. He also developed impulsive, aggressive and pompous tendencies.

These qualities alone, do not make one a cruel dictator and some countries require a dictatorship rather than a democracy like we have here in the west. Studying the Iraqi people I tend to think that they function better under a dictatorship but one that allows for them to grow and develop within a firm framework, rather that the freedom style of government that we are used to. We know as astrologers, that when look at a chart, all personalities are different; so too are countries and look to be treated as such.

One style of government does not suit all and we need to study a culture very hard to come up with a regime that is going to work for that particular country. The current scenario certainly is not working in Iraq. Other points of interest in his horoscope are, Mars in Sagittarius which gives fluctuating energy, Mercury in Taurus, one sided view point and Jupiter in Capricorn bought him the wealth.

It is not until we look at the horoscope on the 90 degree dial that we pick up his cruel and sadistic streak. In his natal chart Neptune and the Moon’s Node are together and these form a mid-point to Mars and Saturn which is considered a very heavy pattern. If allowed to manifest on the negative side we have deceit, untruthfulness, misdirected energy, torment and the undermining of others, coupled with painful or grievous loss through others.

On the day of his hanging this pattern was triggered by transiting Mars in Sagittarius bringing his life to an end. In Ebertin’s book, The Combination of Stellar Influences, the possible manifestations of this model include, a mysterious death, prisoners and mourners, which ironically sums up, the moment when time merged into eternity for Saddam Hussein. On our quad dial we see that the Saturn has come to the point where it is across the dial to Venus and also the solar arc Venus was with orbs of the natal Saturn.

This indicates that in no way was he happy with the outcome, nor was he ready to die. Neptune by solar arc had come to Mercury which is often in the chart when there is deception and this was being activated by the transiting Saturn, which is morbid sensitivity and pessimistic thoughts. In life there is an old saying, “if you live by the sword, you die by the sword.” Had Saddam Hussein ruled in a more careful and caring manner he may very well be still there today, but power, absolute power often corrupts and it is usually the beginning of the end. Looking back on our quad dial we see that the death axis, was activated three years prior when by solar arc he had Saturn to Mars.

This was when his sons Adwar and Uday were killed, so as I have often said, we may be able to see the influences around us such as death, loss and grief, but we can never be a hundred percent sure who the person will be.

The objective of this method then is to be able to see in advance things they may manifest and then be able to try and turn the tide of the flood of the river, if it is at all possible. However, Hussein’s fate was sealed when he was found guilty of crimes against humanity and sentenced to death. After an appeal was upheld on December, 26th 2006, this fierce and fearsome dictator, finally left us for good, as he went quietly into this good night thing, without a fight.